A few months ago, we decided that we would need help with the bodywork and had contacted Pete at Kustom Restoration Specialties (KRS) about doing bodywork on the Triumph.  (KRS is located in the same lot where we take our cars to get serviced and Pete's british racing green Triumph TR3 is almost always sitting outside.)  Pete kindly offered to drive up to the house to take a look at what we were dealing with.

He stopped by the house a couple of Sundays ago, in his TR3 of course, and took time to walk over the car with us.  He quickly noted what we we knew to be the troubled areas (floor panels, wheel arch areas, etc), but then started pointing out bondo-ed and patched areas we had no idea were present.

A quick squeeze by Pete on the ledge underneath the passenger door revealed to him that that area had been bondo-ed.  (He literally squeezed the panel then tapped on it to figure out that ledge had been bondo-ed and then painted over.)  Using a flashlight to inspect the exterior condition from the inside of the car, he also found that the car was likely in an accident where the rear passenger wheel area had been impacted.  Further inspection revealed to him that the owner of the car at the time had patched the panel in place using pop rivets (rivet tubes were exposed on the inside of the car).

Some more tapping, squeezing, and inspecting by Pete revealed to us that the Triumph had way more bondo on it than we thought.  One thing Pete pointed out was to look for metal seams along the car.  The attachment of body panels at the factory left seams with spot welds that should still be visible under the paint job.  However looking at certain areas of the car (rear driver side light area, body area behind the front wheels), the seams that should have been present were not there - the areas were smoothed out - and those places had been bondo-ed over.  I asked for Pete's assessment of the body condition and he candidly answered that it was not the worst that he has seen.

Also, Pete noted that we should have done the bodywork before fixing up the chassis, since the body needs to be on the chassis during bodywork to make sure the two fit/align correctly.  It is not the end of the world that we did this, but the chassis will be scuffed up a bit as the body is getting worked on, hence, the order should have been restore body first then chassis.

So, in the end, not the worst, but it's definitely much worse than originally thought.  I will try to post some pictures in the new year after we thaw out a bit from all the snow and cold weather.
Posted by amy at 7:37 PM 3 comments:

Fall came and went with us working infrequently on the Triumph and encountering small enough issues that no progress was made (well, some knowledge was built, but no advancements in Triumph repair were made).

Cleaning and painting the differential

Finally worked on something other than the engine - the differential.  I had previously scrubbed and hosed most of the grease off the differential, so today was spent wire brushing, cleaning with denatured alcohol, and applying a coat of paint.

Before wire brushing and cleaning: 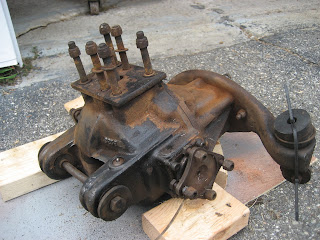 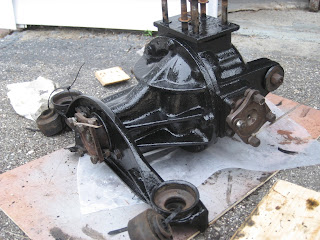 While working on the differential, some oil had leaked while i tried to clean/paint the underside of the differential.  I'll need to look a bit more at this later, but for now, differential painted can be checked off on the list of things to do.
Posted by amy at 6:37 PM 2 comments:

Before we get to the big reveal, this is what the engine looked like before: 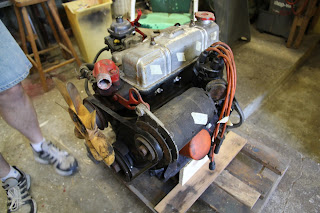 ...and from the other side. 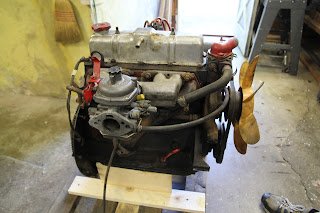 The engine before we attached the intake and exhaust manifolds... 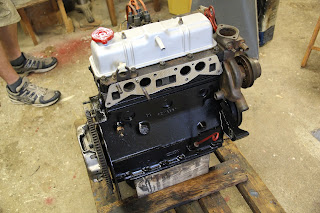 ...with the intake and exhaust manifolds (we painted the water pump after we came back from NY). 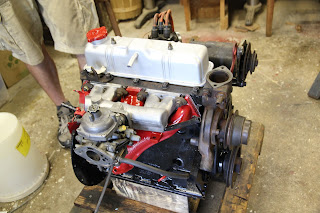 The repainted bell housing of the transmission: 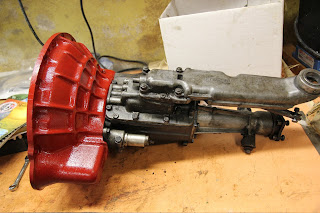 And last but not least, the engine ready to go back to Massachusetts. 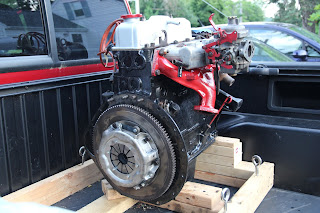 A huge thank you to Fred for hosting us and helping us through the engine restoration.  Without his help, we would probably still be working on the engine for at least a year (or more given my latest track record).

Also, a thank you to Chris for the free manual labor (he did all the heavy lifting) and allowing me to use his truck to haul an engine and transmission across New York.
Posted by amy at 4:37 AM No comments:

There was a lot of cleaning and painting to be done on this trip - valve cover, transmission bell housing, the engine block, ...

Below is a picture of some of the parts needing an exterior refresher... 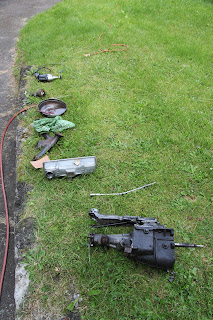 Below is what the bell housing looked like before.  There was a lot of debris and grease that needed to be wire brushed and kerosene cleaned off. 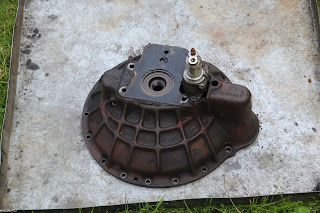 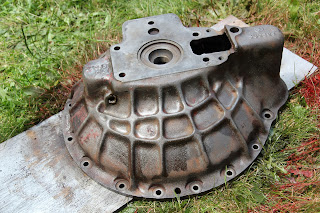 After a good scrub done of the engine, I masked off parts that should not be painted and used a brush to paint on black, high heat resistant paint. 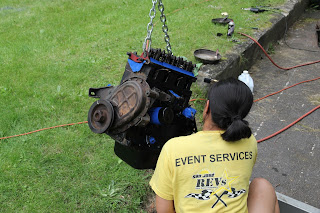 Prior to this trip, I had always assumed that you needed to use engine-specific spray paint for the engine block, but after talking to Fred, he had always used generic high heat resistant paint for all his engines and did not have issues.  So if it worked for Fred, I figured it will work for me.


Being able to paint on the paint with a paintbrush meant I did not have to mask off everything, just the edges that were not to be painted (so much easier to prep).  The paintbrush can leave slight brush marks, but with the rough, casted surface of the engine block, you cannot see a difference.  The only place where this is slightly noticeable is the oil pan and you have to get really close to notice this.

I think it came out really well, but you'll have to wait until the next post to see for yourself.  :-)
Posted by amy at 6:21 PM No comments:

Forward: Learning the following information proved useful a few weeks later as Chris and I found ourselves helping a friend fix up his boat engine during a week long stay at Lake George.  Long story short, the engine to his boat was running roughly and stalling at low RPMs.  Cleaning up the carburetor fixed this and we saved the vacation (not really, but people were really happy to use the boat during the vacation).

Step 1 - Removing the idle trim screw.  Before removing the screw, count how many turns it takes to tighten the screw down to where you just start to feel resistance.  In our case, it was 1.5 turns.  (This information is used later when installing the screw.)  After you get this information, unscrew the screw. 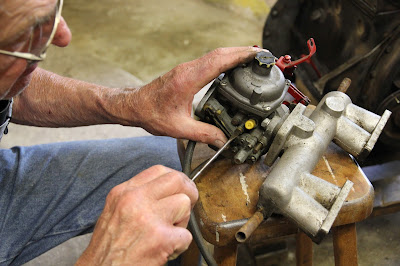 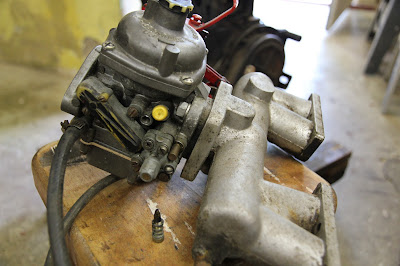 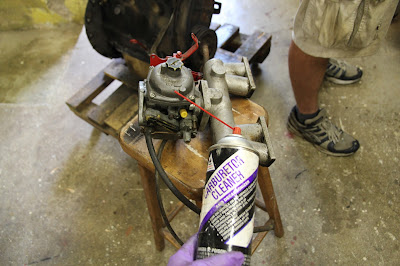 Although the clutch appeared to be in good condition, we had purchased a 3-in-1 clutch kit (release bearing, clutch cover, and clutch disc) a while back and figured we would replace these parts while we had easy access to them.  Installing a new clutch was pretty straight forward and replacing the release bearing was also straight forward after Fred realized he had a few pullers stowed away in a box in the garage. 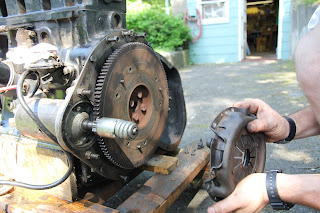 Replacing was the opposite of removing, but before tightening the bolts down, we had to make sure the clutch was aligned.  To do this, Victoria British sells an alignment tool that is a shortened model of the transmission input shaft.  You put the tool through the center of the clutch and make sure everything aligns accordingly before tightening down the bolts to spec.... 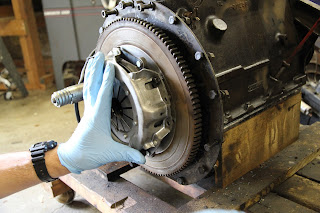